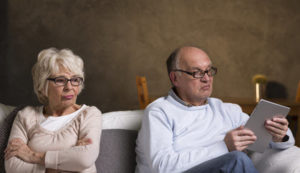 The term “gray divorce” refers to divorces that occur between spouses who are over the age of fifty. Not only do gray divorces involve a particular set of issues, the Chicago Tribune reports that between 1990 and 2013 the number of gray divorces doubled. Gray divorces present a unique set of circumstances: usually these divorces concern the division of property and assets including retirement benefits. Often in gray divorces, child support and custody are not considered because any children of the divorcing couple are usually too old to require supervision. In addition to the types of issues that tend to arise, there are also several other elements about gray divorces of which couples considering separation should be aware.

Divorce in general tends to be an expensive event, but gray divorces are often more expensive than divorces between younger couples. While a younger couple has time to financially recover from the devastating effects of a divorce, an older couple often has a difficult time healing from a gray divorce. This additional cost is not to say that elderly couples should avoid gray divorces but rather that it is wise to be aware of the large financial blow prior to initiating the divorce.

Financially, gray divorces are most devastating to women. A 2016 study published by the Association of Healthcare Journalists reports that 27 percent of women are left in poverty after a gray divorce as compared to 11 percent of men.

Women can protect themselves during and after a gray divorce by diversifying insurance policies, maintaining a separate bank account, and knowing existing social security rights.

At Lindamood & Robinson, P.C. in Houston, we understand that gray divorces present a unique set of circumstances and challenges. Fortunately, our skilled lawyers have helped many other clients obtain gray divorces and successfully navigate the various obstacle that arose. If you are debating initiating a gray divorce, consider retaining our gifted legal services so that we can begin helping you today.